Posted on 4 November 2009 by Raphaël Mazoyer 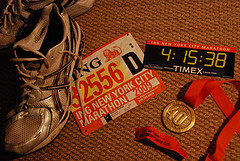 On Sunday, I ran my first 42.195 km race ever, the ING New York City marathon, the 40th edition of the most iconic long-distance running event.

I would like to thank New York for the amazing atmosphere along the route, and around the event. The crowd gives support that I honestly did not believe in, before experiencing it for myself. (Note: my use of the term “amazing” is not, in this case, an American exaggeration, I really really mean it.)

As a whiny, worried, on-again-off-again, mildly hypochondriac jogger with Woody Allen glasses who’d only achieved a half-marathon (the really nice Brooklyn Half in May), I’m very pleased with my finishing time, and also quite surprised at the relative regularity of my pace.

This deserves a blog post because it has changed my perception of the support runners get from the public. In no race I’ve done before was the interaction with spectators really important. Perhaps it’s the distance–although in the 2500 years since Pheidippides’ death, the discipline has become a lot less lethal. It’s probably the terrain–my very limited training took place exclusively on flat ground, which is all I have in Holland, but 1st avenue is long and steep. (Course map and elevation chart [both PDFs] look much milder than it felt!!) The uncertainty of a first time certainly contributed–was I actually able to pull it off? And it’s definitely the aura of the city, the hard competitive edge that makes you want to make it at all costs.

In any case, the pressure is high, and the incredible strength of the NYC crowd is the generosity of the support it offers: seldom did I feel people encouraging me in a performance-oriented way (very few “come on” or “faster”), and there is no judgment in people’s eyes when you walk (which I did for perhaps a total of a kilometer or two over the last, tough, tough third of the race). Their unwavering cheers turn explosive when you start running again, yet bearing no grudge and conveying no trace of contempt for the walking.

I suppose I never really believed in external motivation, especially from people I don’t know. At my previous race, a group of spectators had a scout 20 meters ahead of the rest, who asked my name. I couldn’t think of a way to decline, the scout passed my name to the group, who cheered me by name as I passed. Totally artificial, obviously. But what I didn’t truly appreciate then, is that artificial doesn’t mean fake, false or insincere.

My favorite sign: “Your feet hurt from kicking so much ass!” Unabashed wholesale flattery, seen in hundreds of other races, but I now take it to be totally genuine, and it fueled a huge chunk of my run. That, and kids offering high-fives.

Because of the pressure of the race and because of the raucous intensity of the support, New York got me to realize that “it’s mostly in the head, it’s a game of determination” doesn’t mean I have to take care of that part all by myself. Yes, the audience gives help for the mental part too. (Honestly, I can’t even believe I’m writing this! What’s next?!)

I did believe in individual help — and my friend David provided that, piggy-backing from mile 7 all the way to 110th street and Central Park. Running next to me or a step behind, stopping when I did, he provided silent backup that accounted for another chunk of the run, and I can’t even begin to thank him for lending me his strength. (Good luck in Philly, man!)

So: thank you, New Yorkers, for this incredible experience! And to give more perspective, let’s have a quick look back:

(Read and hear more from the awesome Gary Muhrcke, first winner in 1970.)

This entry was posted in Commentary. Bookmark the permalink.