About me (Raphaël Mazoyer)

Posted on 10 October 2009 by Raphaël Mazoyer 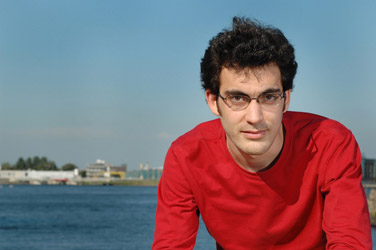 Hello, my name is Raphaël Mazoyer. I was born in 1978 in France. (The photo above is now over a decade old… There’s more gray in the hair now.)

As a freelance digital strategist, I will enable your business to understand the impact and potential of digital technologies, and the social change they trigger. I can then help you launch an e-commerce operation, cultivate consumer loyalty to your brand, or freeing your teams’ creativity with modern working practices.

For a year, I was head of client services at The Plant, where I worked on the Lacoste Japan e-commerce platform, various transactional sites (ask me about airport parking, that was fun!), and a cool R&D plus business development project for Danish magazine publisher Aller Media.

In early 2008, I joined the European office of ASICS, the Japanese sports equipment brand famous for its running shoes. As regional digital communications manager, I deployed a new content management system and centralized the company’s online efforts, also working on the lifestyle brand Onitsuka Tiger. In 2011, I moved to headquarters in Kobe to reinforce the company’s global marketing efforts. I built up a Digital Marketing team, overseeing online communications, digital services, and e-commerce. In April 2013, the first online shop was launched in the US using a global Hybris platform, and by the time I left the company in May 2014, we’d also launched in Japan, the UK and Australia.

I joined the Montreal-based digital branding agency CloudRaker as a producer and account manager, and I took care of the company’s Amsterdam office.

For two years, I was responsible for the European consumer operations of Japanese weather forecast agency Weathernews at the company’s headquarter in Makuhari (Chiba prefecture), and developed its mobile and web weather information services, working on both commercial and technology aspects.

In early 2004, after 5 years as a one-person web operation, I joined forces with three on-and-off partners and formally launched the digital agency Splandigo, delivering content-managed web sites. I was in charge of technology, often served as project manager, and worked on sales, writing offers for our largest clients. My longest-running project was the web site for the RINO, and my coolest was the SAIL’05 site. I left Splandigo in the Summer of 2005. The company stopped operating in 2006.

A founding member of French co-operative web hosting provider Ouvaton, I was elected in May 2003 to the board of directors for a 3-years mandate, and returned to the “rank and file” of the group in 2006. I worked on upgrading the hosting platform software, which hosts this web site.

I studied Digital Media Design at the HKU in Hilversum, the Netherlands, graduated in 2002, with a European Media Master of Arts (EMMA) from the University of Portsmouth.

I currently live in Tokyo, like to travel, cook, run and talk (especially about politics). You can reach me through this contact form.

This entry was posted in About. Bookmark the permalink.